A look back at the highlights and memorable moments of the 2013 racing season.

As we draw to the end of 2013, it‚Äôs great to look back over the significant events of year, which was action packed in terms of outstanding performances and achievements, events and stories. For the Museum, it was a landmark year in terms of progression towards the new National Heritage Centre for Horseracing and Sporting Art development. 2013 was also a poignant year, as racing said goodbye to one of its most popular characters.

Although far from a highlight, the sad death of Sir Henry Cecil was undoubtedly one of the most significant events for the sport, as racing professionals and fans were united in mourning one of the greatest and most iconic British trainers, and a universally loved and respected gentleman.

Similarly, the revealment of steroid use by trainers Mahmood al Zarooni and Gerard Butler dominated the Flat season, although the swift and harsh punishments enacted by the British Horseracing Authority BHA indicated the sport‚Äôs commitment to cleanness and transparency.

Away from such tragedies and scandals, the athletes, both horse and human, lit up the year with some remarkable feats.

Hurricane Fly had a particularly memorable year, as he not only became the first horse since Comedy of Errors in 1975 to regain the Champion Hurdle, he also broke the record for Group/Grade 1 wins to take his overall tally to eighteen top flight successes. 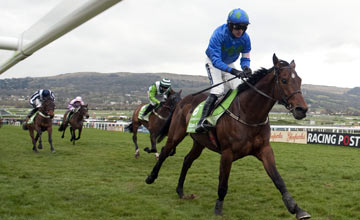 His stablemate Quevega made her own piece of history by winning a fifth Mares Hurdle at the Cheltenham Festival, matching the record held by five time Cheltenham Gold Cup winner Golden Miller.

Over fences, Sprinter Sacre simply dominated the two mile chase scene, and added to his already lofty reputation with a scintillating win in the Queen Mother Champion Chase, before adding Grade 1 wins at both the Aintree and Punchestown Festivals (the first since Istabraq to do so). Fingers crossed that he returns in fine form in the New Year.

Sprinter Sacre: out on his own

For Roz, the Museum Marketing and Audience Development Officer, the highlight of the season was the ‚ÄúGrand National and the fact that is was so successful following the safety measures taken.‚Äù ¬†She also greatly enjoyed the successes of Sprinter Sacre and the Nicky Henderson team, and cannot wait for the 2014 Cheltenham Festival.

The Flat season provided its own memorable moments, including Dawn Approach‚Äôs rousing win in the 2000 Guineas that lifted Godolphin from the shadows of the steroids scandal, to Estimate providing the Queen with a wildly popular victory in the Gold Cup at Royal Ascot. On a similar note, the filly Riposte provided Warren Place and Lady Jane Cecil with an extremely poignant win in the Ribblesdale Stakes, just a week after the death of Sir Henry Cecil.

The clashes between top three year olds Dawn Approach and Toronado were a highlight for Museum friend and guest blogger, Tony Lake. Here he provides his take on their rivalry:

‚ÄúI love good horses racing, especially against each other and extra especially more than once. This year I was spoilt. The clashes between Dawn Approach and Toronado will linger my memory for a long time. Jim Bolger‚Äôs Dawn Approach was the champion two year old yet Toronado was so impressive in the Craven Stakes that the Hannons were bullish going into the Qipco 2000 Guineas. Dawn Approach won the colts‚Äô mile Classic comfortably, but there were excuses for Toronado. Round two was in Royal Ascot‚Äôs St James‚Äôs Palace Stakes. Kevin Manning, on the Godolphin horse, held off Richard Hughes‚Äô mount by a short head. However, did Toronado‚Äôs troubled passage cost him the race? We were then treated to ‚Äúthe Duel in the Downs‚Äù. This time, in the Qipco Sussex Stakes, Toronado prevailed by ¬Ω length. Great horses making great horseraces.‚Äù

Sadly, the Flat season also saw the unfortunate injury and subsequent retirement of one of its most popular horses, St Nicholas Abbey. Assistant curator Alan Grundy recounts his story:

‚ÄúI have always been a fan of St Nicholas Abbey. His win in Dubai against the Japanese fillies Triple Crown winner Gentildonna was terrific but his third win in the Coronation Cup trumped that. What trauma was to follow in July with his horrible accident on the gallops. His struggle to survive has been painful and through his latest critical problem everyone is still on tenterhooks. Hang in there St Nick.‚Äù

Making up for his loss was Farhh‚Äôs recovery from numerous (more minor) injuries to book-end an interrupted season with an impressive win in the Lockinge, and a hard fought triumph in the Champion Stakes, his final race before stud.

The continuing success of German horses was emphasised by Novellist‚Äôs romp in the King George VI & Queen Elizabeth Stakes, although he was sadly denied a crack at the Arc due to illness. His absence was more than made up for by the wonderful Treve, who capped her unbeaten season with a demolition of Japanese superstar Orfevre. She is definitely one to look forward to in 2014.

Slightly closer to home, 2013 was an excellent year for all at the Museum. Here, Museum Director Chris Garibaldi recounts the progress made towards the new National Heritage Centre for Horseracing:

‚ÄúFor me the real highlight of 2013 is having crossed the line in terms of the minimum fundraising target required to start building the new National Heritage Centre for Horseracing and Sporting Art at the Palace House site in Newmarket. We are still raising funds to ensure the displays and exhibitions are as good as they possibly can be but it is a tremendous achievement to have got to this point. The builders have been appointed (Graham Construction Ltd) and are preparing the way for building to start just after Christmas. With a year of building and then a similar year of specialist fit-out for the displays and exhibitions (not to mention the small matter of moving over 8,000 objects from the present museum to the new one) we expect the National Heritage Centre to be fully open to the public early in 2016 (see: http://www.homeofhorseracingtrust.org).‚Äù

Furthermore, those connected to the Museum, including staff and trustees, were fortunate enough to visit Frankel at his new home, as told by trustee Tim Cox:

‚ÄúA warm evening out at Banstead Manor with the opportunity to see Frankel after his first season at stud.¬† This was a fund-raising evening for the Museum that was full of expectation.¬† Having seen nine of Frankel‚Äôs races including a special trip to York to see him handle the longer trip in the Juddmonte International, he had become the horse that I could recognise immediately.¬† Everybody knew that he was difficult to train and that there was always the danger that he would run away on the gallops.¬† But here he was strutting his stuff.¬† He was the centre of attention and ready to pose for the cameras. ¬†Stud life obviously suits him.‚Äù

The arrival of Frankel‚Äôs first crop of foals in early 2014 is undoubtedly one thing, among many, to look forward to in the New Year.

¬†Happy New Year to all!

By Alice Kay, with the kind assistance of Museum friend, Tony Lake.