Our guest blogger Tony Lake reflects on the Lincolnshire Handicap when it was run at Lincoln in the nineteenth century.

Like snow drops and daffodils the Lincolnshire Handicap provided optimism and was a sign of things to come ‚Ä¶such as the City and Suburban and Great Jubilee. Soon after Christmas bookmakers would offer ante-post odds on the big race still some three months away. Most trainers hoped to run something in ‚Äúthe Lincoln‚Äù, if only to compare the well-being of their string. Many horses, hindered by firm going during the previous summer, would have been put in serious work for many weeks before the Lincoln meeting, with their owners hoping to recoup some money on the invariably better going. The first big handicap of the year was a source of excitement and anticipation. ¬†

A Lincolnshire Handicap was established on the Carholme in 1849, however, that was run over 2 miles in August. The spring handicap that we know was first run on Tuesday, March 22nd, 1853. Postponed from February the two day meeting still had to endure snowstorms, with bettors seeking refuge in the weighing room between races. In the event, Mr Saxon‚Äôs Caurire prevailed by a head, thanks to a fine ride by Clements, defeating eight opponents. Before the year was out the chestnut gelding won a hurdle race at Epsom and a handicap over the Cesarewitch course.¬†The first two runnings were over 1¬Ω miles with the 1854 renewal going to Georgey. Trained by Bateman at Melton Mowbray, Mr Dawson‚Äôs four year old cleverly dispatched his nine rivals in the hands of Aldcroft. 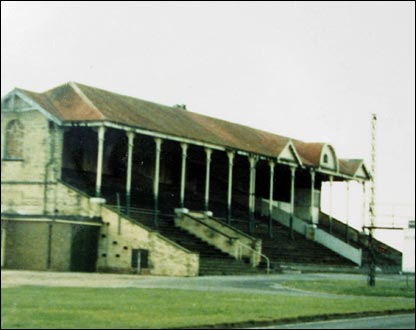 The old stand at Lincoln racecourse

The 1855 race was historic in more ways than one. The race was contested over 1 mile for the first time and the winner went on to take an English Classic. In the Lincolnshire, the George Fordham ridden Sauceboat went off the even money favourite to win the four-runner contest. Comfortably landing that prize for owner trainer, Mr Parr, the horse, said to have been a "weakling brought up on a bottle", ran 26 times, winning 10, before clinching the Leger at 40/1.

Over the next decade the race struggled to find an identity. Following the classic winner the next winner was Flageolet who went on to win a hurdle race at Waltham Abbey steeplechases in December. Although the prizemoney was increased to ¬£100 in 1858 the February fixture did not appeal to racegoers. ¬†Wintery weather even caused the postponement of the 1861 race, which eventually went to Benbow. Those who did brave the elements in 1860, however, were treated to a magnificent battle between two fine jockeys, Fordham and Snowden, with the former prevailing on Vigo by a head.

The low point came in 1865. Since the race was run on the round course and often resulted in scrimmaging and hard luck stories, the start of the race was most important.¬† Once again the race was postponed due to the weather and even on the day the race was delayed.¬† After Sharp had been thrown from Terror it was a further hour before Kenyon took the mount. At the ‚Äúoff‚Äù jockey Carroll, riding for the wily John Osborne, got a flyer on Gaily and led from pillar to post. ¬†There was an objection to the winner on the grounds of a "flying start" which the stewards overruled. Nonetheless The Times correspondent was not alone when he expressed his consternation about starts.

By 1870, the race had found its slot in the fixture list. A date early in March meant that the meeting fell in the same week as the Liverpool meeting and thus became "the start of the racing season" (which was often topped off with the boat race). Consequently, the race became increasingly popular with the streets of Lincoln city thronged on the Handicap day. ¬†From about eleven o'clock onwards there were continuous lines of pedestrians between the station and the course. The Great Northern, Great Central and Great Eastern put on special trains, and punters congregated from the industrial North and Midlands as well as London. Indeed the only problem identified was ‚Äúwelshers ‚Ä¶who need to be stopped at the gate‚Äù.

In 1871, those who had made the journey witnessed a terrific race. Twenty four runners faced the starter and at the finish the judge was unable to separate Vulcan and Veranda. It was decided to have a ‚Äúrun off‚Äù, however, Vulcan, ridden by Jarvis, ended up walking over after Veranda was withdrawn.

Jarvis interrupted the winning streak of Charlie Maidment. Winning the race four times in six years, with Indigestion (1868), Royal Rake (1870), Guy Dayrell (1872) and Vestminster (1873), it‚Äôs perhaps not surprising that he became known as "the lucky jockey". Vestminster was the best winner for some years having landed the Cambridgeshire four years earlier.

As the race was beginning to attract more runners, averaging over 20, it was decided to run the 1874 renewal over the straight mile. With significant prize money attracting a big field, the handicap was no longer a third rate race, but quite possibly ‚Äúthe premier handicap of the season‚Äù, according to The Times, with its entries matching the Cambridgeshire. 35 runners went to post for the ¬£1000 prize and Fred Archer won it on Tomahawk. Carrying 6st 4lbs Tomahawk is only one of six three year olds to be successful in the race.

The Lincolnshire had become the feature race of a three day meeting and was the target of many betting plots. Some gambles were landed whilst others failed. In 1877, the Stanton stable backed their filly Footstep and rewarded their apprentice, Hopkins, ‚Äúa century‚Äù after he won. Bob Peck‚Äôs Russley stable had two well-supported successive victories. Kaleidoscope, who had been favourite for 1876 2000 Guineas, only to be beaten by lesser fancied stable companion, Petrarch, did not make a mistake in 1878, and it was third time lucky for the yard‚Äôs Touchet in 1879, after finishing fourth in the 1877 and 1878 renewals.

The Lincoln is now run at Doncaster

The gambles in 1880, however, came unstuck. Throughout the winter, Placida, who had won the 1877 Oaks, and was the mount of Archer, had been well supported, whilst William Stirling Crawfurd‚Äôs eleventh hour purchase, Elf King, coincided with a rush of money for it. Meanwhile Elf King‚Äôs stable companion, Rosy Cross drifted. At the line, however, it was John Dawson Senior‚Äôs lesser fancied runner who finished clear of Placida and a fast finishing Elf King. Crawfurd enjoyed better luck the following year when his grey, Buchanan, finished ten lengths clear of his 35 rivals. Maybe all was not what it appeared though as one correspondent thought ‚Äúa lot behind were stopped".

1882 saw another gamble foiled. Mr Hungerford had bet ¬£100 to ¬£1000 that his Hesper would win at Sandown, Croydon and Lincoln. After securing the first two legs, the horse in Olding‚Äôs care was backed down to favouritism. In the race run in a hailstorm, however, Hesper made no show behind Count de Lagrange‚Äôs Poulet.

After enjoying a decade of unprecedented popularity, in 1883, the course executive bowed to critics who said that there was ‚Äútoo much racing in the week‚Äù. Conceding to the Liverpool and Northampton meetings, The Lincolnshire became the feature event of a two day fixture. With 17 runners the field was (coincidentally) the smallest since 1870 and went to the Charlie Wood partnered Knight of Burghley. Wood followed up in 1884 on Tonans, who was certainly not winning a big prize out of turn having finished a neck behind Bendigo in the Cambridgeshire as well as going close in the Liverpool and Shrewsbury Cups.

Bendigo himself, one of the most popular horses in Victorian England, won the 1885 race. Although opposed by the former Derby winner, St Blaise, who was partnered by Archer, and a number of unexposed types, the five year old was backed into 11/4. The race was off later than usual because there was an hour interval after the Grand National Hunters ‚Äòchase to allow for the funeral of the Bishop of Lincoln, Christopher Wordsworth. Then 40 minutes was lost when Mespilus‚Äôs jockey, Sam Loates, broke a leather and had to borrow a hack to return to the paddock to get fresh gear. ¬†No doubt agitated by the delay the runners were fractious at the start and there were a number of false starts before Mr Custance finally got them away. The business end of the race was much more straightforward with Bendigo winning by three parts of a length. His success was so popular that the Cavalry Brigade, at war in the Sudan, was heliographed the result from their headquarters. His popularity, however, did not extend to the bookmaking fraternity, especially after the 100/30 favourite, Roquefort, won the Grand National ensuring heavy ‚Äúspring double‚Äù losses.

If not popular, but certainly formidable, ‚ÄúMr Manton‚Äù, better known as Countess of Montrose, and the widow of Stirling Crawfurd, won the race with, the Alec Taylor trained, Oberon, in 1887. Other influential owners also winning the Lincolnshire before the end of the nineteenth century included Prince Soltykoff, with Lord George who just got the better of French trained Seraphine II, and Baron de Rothschild, with Le Nicham who was trained at Palace House Stables by Heyhoe. Sir Robert Jardine won it with Wise Man, but not before a scare. Well supported throughout the winter and second favourite on race day, the mount of Tommy Loates bolted at the start. Considerable delay was caused by the four year old‚Äôs fractiousness, and for a long time he refused to join the other runners. Nevertheless, after two false starts, the twenty six runners got off to a ragged departure with Wise Man soon taking a prominent position. In a close finish, responding to Loates‚Äôs strong driving, Wise Man won by half a length.

As the nineteenth century drew to a close the race was dominated by Jack Robinson. The Classic winning jockey retired from race riding at the end of 1892 and began training in 1893. ¬†From his base at Foxhill, Wiltshire, he sent out Clorane, Winkfield‚Äôs Pride and Prince Barcaldine to win consecutive Lincolnshires between 1896 and 1898. Clorane‚Äôs success was one of the race‚Äôs greatest performances. The five year old won the race easily by a length, under Mornington Cannon, shouldering a record breaking 9st 4lbs. Asked to carry 9st 8lbs in 1897, Clorane ran a creditable fourth, when victory went to his stablemate Winkfield‚Äôs Pride. The 7/2 favourite won in good fashion giving Morny his second winner of the big race. ¬†However, it was Nat Robinson, Jack‚Äôs younger brother, who brought off the hat trick for the stable. Riding Prince Barcaldine the lightweight jockey lowered the colours of 11/8 favourite Ravensbury.

Prince Barcaldine was well fancied to be the first horse to win the race twice, but was well beaten by General Peace in 1899.¬† Owned by the popular gentleman rider Captain Percy Bewicke, ‚Äúthe General‚Äù tracked the stable second string, Little Eva, until sent on at the four furlong pole by Otto Madden to run out a very easy winner.

Riding the runner-up, Knight of the Thistle, was American jockey Tod Sloan. Still an unknown quantity in this country many punters shied away from his mounts.¬† They would soon learn that the American invasion was just beginning and racing was about to embark on a new era. But that‚Äôs for ‚ÄúThe Lincolnshire Handicap ‚Äì The Lincoln Years ‚Äì Part 2‚Äù and another day.